Romania is located in Eastern Europe, as one of the countries belonging to the former communist bloc up to 1989, and which now is aiming at a level of development depicted by the countries of the Western Europe.
However, the wilderness of the Carpathian Mountains and the archaic lifestyle  of some of its inhabitants cast a remarkable charm upon these places, which cannot be found in more developed regions.

The Apuseni Mountains (the ‘Westerners’) are located in the mid-western part of the country and have the lowest altitude of the three Carpathian groups. This morphological feature allowed the people to disperse their settlements throughout their surface and thus, a very dense network of roads has developed. Nowadays, these unpaved connections are perfect for motorcycle tracks, in particular for the Soft Enduro category, on which the guide focuses. 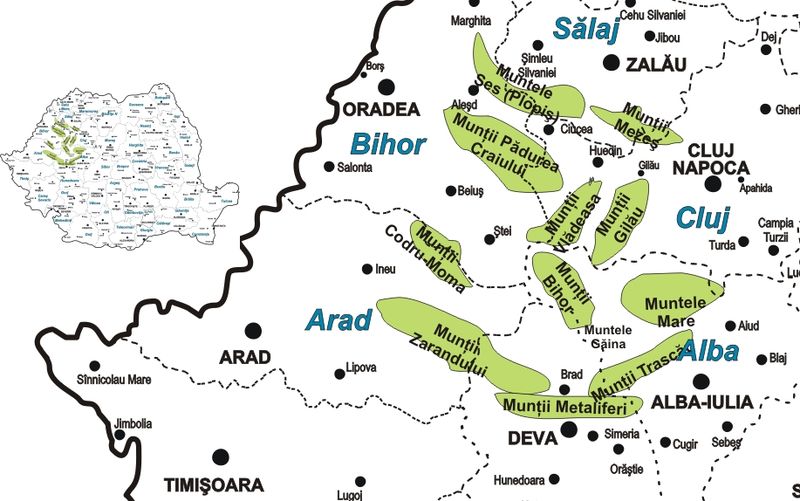 Location and the structure of the Apuseni Mountains

The oldest traces of habitation in these mountains are tied to the cave inhabitants, which have marked their existence through mural drawings, such as those of Coliboaia cave from the Bihor Mountains.

The gold from the depths of the earth, hidden predominantly in the Metaliferi Mountains, helped the development of Dacia (country inhabited during Antiquity by the Getae-Dacians, the ancestors of Romanians), and subsequently lured the rulers of the Roman Empire, thus leading to the conquering of these territories. Traces of mining exploitation from that period still exist, as it happens to be one of the main topics from the descriptions of the circuits; the Gold Museum of Brad, the Gold Mining Museum of Roşia Montană or the Roman Steps nearby Ruda-Brad – are among the landmarks most referred to.

The alternation of the geological under layers is another important feature of the Apuseni, and has resulted in very long periods of time, to the development of certain extremely spectacular relief shapes. The karst formations are undoubtedly the most numerous; Padiş plateau is the most impressive karst areal from Romania; also the volcanic shapes are stunning, such as the volcanic necks from Mureş Valley (Fortress Hill of Deva or Uroi’s Hummock); and the sedimentary rocks of Snail Hill have captured almost 65 million year old life forms.

The costumes and traditions of the inhabitants are another topic which the guide has taken into account. Significant ethnographic exhibitions such those of Inceşti village  (‘Avram Iancu’ Memorial Home) or Sălciua de Jos  village(‘Valer Butură’), and also smaller ones, open upon request, are marked on the map and their details can be consulted in the Index from the end of the guide.

Do you need more information to visit them ?
More details (208 pages of them) can be found in the Apuseni Mountains Guidebook